Why «putin’s cook» is in the center of attention 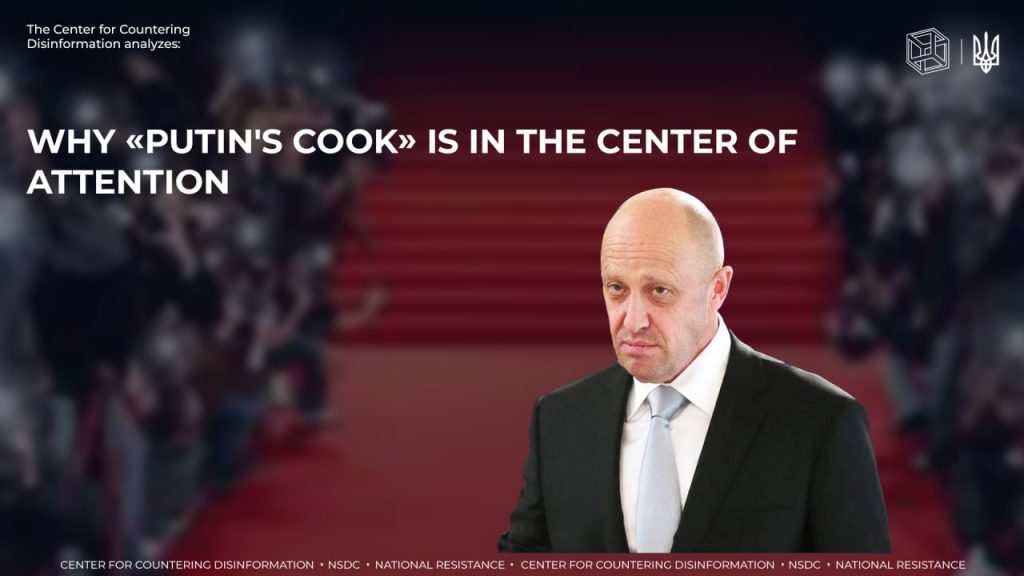 ❗️The man known as «putin’s cook» is at the peak of his political power and influence and continues political battles for power in the kremlin with various people and structures – from the head of st. petersburg to the ministry of defense of russia.

☝️ During the eight months of the russian invasion of Ukraine, prigozhyn gained a bad reputation associated with the ownership of the most famous private military company in russia PMC «Wagner». The existence of private military companies isn’t provided for by russian legislation, but this circumstance didn’t prevent PMC «Wagner» from becoming an influential military force that competes with the russian armed forces (the total number of units of PMC «Wagner» includes 20-30 thousand people, of which up to 5 thousand). Since the beginning of the invasion of Ukraine, the mercenaries of the PMC «Wagner» group took part in the capture of Mariupol and Sievierodonetsk and also took part in the storming of Bakhmut. Another company is «Internet Research Agency» which is based in the st. petersburg, dubbed the «troll factory», which specializes in Internet trolling by creating fake accounts on Facebook and other social networks, as well as spreading disinformation and propaganda. This company was involved in a conspiracy to interfere in the 2016 US presidential election, and last year the FBI included prigozhin on the list of most wanted criminals.

🔸 Using his status as close to putin, prigozhin increasingly actively influences the processes of making political and personnel decisions in the russian army, which go beyond his powers. His media activity is growing rapidly – he openly recruits prisoners, criticizes high-ranking russian military personnel, as well as the governor of st. petersburg, o.beglov, with whom he has been in conflict for a long time. It was prigozhin, together with kadyrov, who contributed to the removal of general o.lapin from the position of commander of the «Center» group in Ukraine and his replacement by a.mordvichev. Thus, they showed all representatives of the russian elites how they can easily and casually remove and appoint generals and don`t care about the opinion of the ministry of defense, which greatly angered the russian generals. Prigozhin also sent a statement to the prosecutor general’s office demanding an investigation into the fact that the governor of st. petersburg had created an organized criminal community. It is characteristic that putin hasn’t reacted in any way to the attempt to discredit his protégé, moreover, in his hometown.

☝️ Another confirmation that prigozhin is becoming an influential player in russian political life was the opening of an office center in a prestigious part of st. petersburg, which is called the PMC Wagner Center. In the corridors of the office, you can see drones developed by gorbunov’s private design bureau, and a truck with the symbol Z, which is used by russian troops in Ukraine, was parked near the building. It isn’t clear yet what exactly PMC Wagner Center will do. It is publicly reported that the center will be something between a free co-working space for «patriots» who work for the defense industry and a «palace of creativity of pioneers, but for adults». Prigozhin noted that the center’s mission is to provide a comfortable environment for increasing russia’s defense capabilities, in particular, its information capabilities, and military veterans and nationalist and pro-kremlin figures present at the opening claimed that the center will help «make our great country even better».

❗️ There is no doubt that the opening of the «Wagner Center» is prigozhyn’s next step to publicize his military powers and become a subject of political struggle in russia. After all, within the walls of the «Wagner Center» they won’t only conduct paperwork and sign contracts with those willing to fill the ranks of «Wagner» – the center will become a «hub» where military developments will be conducted and information operations will be planned.

☝️ Another step of the «Wagnerivites» was the announcement of the formation of the so-called People’s militia training and management centers, which should consist entirely of local militias. According to prigozhin himself, in the event of an attack on russia, the militias will provide the first line of defense. According to his plan, the enterprises of the region should send 25% of their employees to military training every week. Prigozhyn intends to finance the «centers» independently, without the help of federal or regional budgets.

❗️ Thus, the political ambitions of prigozhin’s group are obvious. And this doesn’t bode well for the current kremlin regime.

✅ By attempting to actually duplicate the functions of the ministry of defense of the russian federation, prigozhin threw down a kind of challenge to putin, because this escalates the conflict with the military even more and brings the defeat of the war, and thus the putin regime, closer. At the same time, the «cook» of the russian dictator is interested in the war in Ukraine only as a tool to occupy a status position in the future redistribution of power in russia.

✅ The formation of the PMC «Wagner» as an alternative center of power, equivalent to official structures, undermines putin’s vertical of power. In such a situation, the private army will inevitably become an instrument the subject of the struggle for power, and he is a figure who determines the political agenda in russia. And «PMC Wagner Center» is the first «brick» in the construction of prigozhin’s party structure on the territory of the russian federation. No wonder, according to prigozhin, if the project proves to be successful and relevant, its branches may be opened in other cities of russia.

☝️ However, the future of prigozhin depends on the political processes in the russian federation, and it’s still unclear whether the ambitious oligarch will be able to continue to play a key role in the political circle of russia, because «putin’s cook» has a lot of opponents at the federal level who are not against neutralizing him.