Головна | Articles | What did the President of Ukraine offer to the G20 participants?

What did the President of Ukraine offer to the G20 participants? 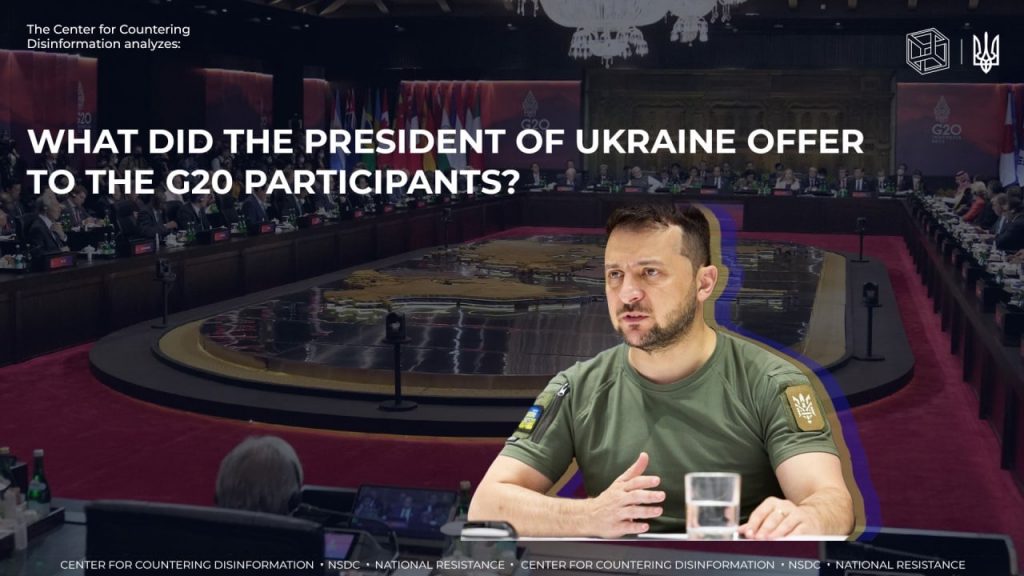 What did the President of Ukraine offer to the G20 participants?

❗️ The powerful video of the President of Ukraine Volodymyr Zelenskyy to the G20 participants in Indonesia became one of the main events of the summit and gained considerable resonance. The main idea of ​​the president’s speech is the presentation of the Plan for achieving peace against the background of spreading rumors about alleged agreements on territorial concessions. In his address, the President of Ukraine called on the world community not to believe russia’s apparent readiness for peace negotiations and emphasized that in order to end the destructive war, russia must confirm Ukraine’s territorial integrity, withdraw its troops from its territory, and pay compensation for the damage caused, not in words, but in deeds. The president stated that Ukraine is not going to sign a peace agreement with russia, similar to the conditional “Minsk-3”, and the war can end only if the aggressor country withdraws its troops, and the territorial integrity of Ukraine is restored within the 1991 borders. It is characteristic that during the speech the President of Ukraine called the «big twenty» G19 several times, implying that russia should be excluded from this association.

The head of the country noted that there is a specific set of solutions that can be implemented in order to truly achieve guaranteed peace in Ukraine.

☝️ The Ukrainian peace formula offers the world’s leading states to be co-creators of peace and includes 10 steps, each of which the Ukrainian leader devoted special attention to.

✅ «No one has the right to blackmail the world with a radiation catastrophe. There are and cannot be any excuses for nuclear blackmail».

✅ «In front of the eyes of the whole world, russia has turned our Zaporizhzhia nuclear plant into a radiation bomb that can explode at any moment»

✅ «Radiation safety must be restored. Please use all your might to force russia to abandon any nuclear threats. The basis for such efforts can be the Budapest Memorandum and the corresponding capabilities of the signatory countries”.

✅ «We can increase exports by another million tons per month. For this purpose, I propose to expand the grain export initiative to our other ports – in particular, to the Mykolaiv and «Olvia» ports in the Mykolaiv region».

🔸 The President called on the summit participants to join the Grain From Ukraine initiative, which will help provide food to the poorest. The humanitarian program Grain from Ukraine will be implemented in partnership with the World Food Program and provides for the provision of grain to at least 5 million people by the end of spring 2023. The essence of the program is the direct purchase of agricultural products by the participating countries of the project from Ukrainian producers and their transfer to countries on the verge of famine. Under the auspices of President Zelenskyy, the international Coordination Group for the Prevention of Hunger, consisting of representatives of the governments of countries, corporations, and philanthropists, which can directly influence the provision of food needs in the world, is starting its work.

✅ «If Russia is trying to deprive Ukraine, Europe and all energy consumers in the world of predictability and stability of prices, the answer to this should be a forced limitation of export prices for russia».

4. Release of all prisoners and deportees.

✅ «Thousands of our people – military and civilians – are in russian captivity. They are subjected to cruel torture – this is mass abuse!»

✅ «We must unite for the sake of the only realistic model of the release of prisoners – «all for all».

5. Implementation of the UN Charter and restoration of the territorial integrity of Ukraine and the world order.

✅ «The second article of the UN Charter very clearly defines everything – everything that russia violated with this war».

✅ «So we have to restore the force of international law – and without any compromises with the aggressor».

✅ «Russia must confirm the territorial integrity of Ukraine within the framework of the relevant resolutions of the UN General Assembly and the relevant array of contractual and legal documents».

6. Withdrawal of russian troops and cessation of hostilities.

✅ «Russia must withdraw all its troops and armed formations from the territory of Ukraine. Ukraine’s control over all sections of our state border with russia must be restored. This will result in a real and complete cessation of hostilities».

✅ «The world should recognize the Special Tribunal regarding the crime of russian aggression against Ukraine and the creation of an international mechanism to compensate for all damages caused by this war. Compensation at the expense of russian assets, because it is the aggressor who must do everything to restore the justice violated by him».

✅ «Millions of hectares of forest were burned by shelling. Almost two hundred thousand hectares of our land are contaminated by mines and shells that have not exploded».

✅ «Last week at the Climate Summit in Egypt, I proposed the creation of a platform to assess the environmental damage from war. We have to implement it».

✅ «A risk that is and will be constantly until our security is properly guaranteed».

✅ «We need effective security guarantees. That is why we have prepared a draft of the agreement – Kyiv Security Compact, and have already offered it to partners».

✅ «We must hold an international conference to fix the key elements of the post-war security architecture in the Euro-Atlantic space, including guarantees for Ukraine, in order to prevent the repetition of russian aggression. The main result of the conference should be the signing of the Kyiv Security Compact».

✅ «When all the anti-war steps are implemented, when security and justice begin to be restored, a document must be signed by the parties to confirm the end of the war».

✅ «If russia resists our peace formula, you will see that it only wants war».

☝️ The kremlin has already reacted to the Ukrainian President’s speech to the G20 participants with manipulative statements that the refusal to conclude new «Minsk agreements» with russia seems to indicate Kyiv’s reluctance to enter into a dialogue with moscow.

❗️In fact, the President in his speech only confirmed that Kyiv will not go to negotiations until moscow withdraws its troops from Ukrainian territories in accordance with the internationally recognized borders of 1991 and recognizes itself as an occupying state. Currently, putin does not offer constructive dialogue and continues to speak in the language of ultimatums.