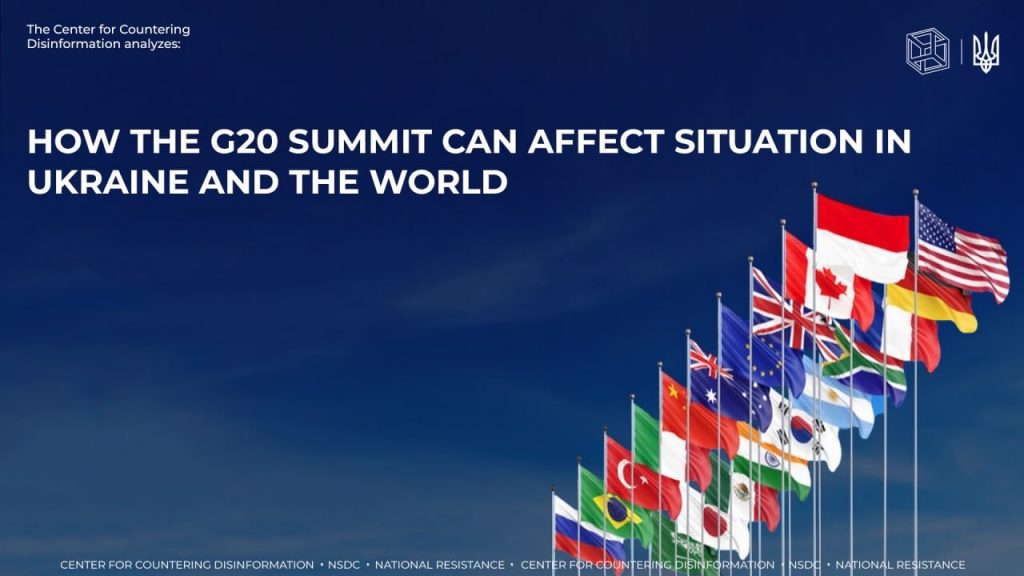 ❗️ On November 15, the summit of the G20 group of the world’s most influential countries and economies, often called the «Big Twenty» in Ukraine, will start on the Indonesian island of Bali. The Ukrainian delegation will also take part in the meeting, the President of Ukraine will also address the participants of the summit in online format. Initially, it was reported that putin would go to this meeting, but later he refused any participation in the most prestigious world meeting and sent the Minister of Foreign Affairs of the russian federation s.lavrov, who arrived in Bali on November 13.

❓ Why does this forum have special importance for Ukraine?

✅ Firstly, due to the fact that this will be the first G20 summit in the last year and the first since russia invaded Ukraine. Due to russian aggression, a record jump in energy prices and moscow’s grain blackmail, this year’s summit will become one of the key world events.

Secondly, Ukraine, which isn’t formally a member of the G20, was invited to the forum for the first time, which testifies to the importance of the «Ukrainian issue» for the democratic community. After all, although the problems of the world economy are on the agenda, the topic of the war in Ukraine will occupy a key place in the discussion.

✅ And most importantly, there is every reason to believe that unpleasant surprises were prepared for the representative of the russian federation at the G20, and the russians cannot avoid public humiliation. The absence of putin won’t prevent other countries from criticizing russia’s aggression and calling on it to withdraw its troops from Ukraine and create conditions for peace negotiations. Western countries promise to boycott their delegation – they will not shake hands with lavrov and, most likely, will leave the hall during his speech. It is already known that the world leaders during the G20 meeting will not take part in the official general photo due to the «massive discomfort of russia’s presence at the summit». The russian dictator refused to participate in the summit precisely because of the fear of receiving «painful slaps» from world leaders on the international platform.

❓ What to expect from the meeting of the leaders of the twenty the most powerful countries?

✅ Instead, many people in Ukraine are waiting for russia to be expelled from the G20. For consideration by the Committee of the Verkhovna Rada of Ukraine, a resolution on an appeal to the countries of the «Big Twenty» with a call to exclude the russian federation from this influential group has been submitted. However, experts believe that due to several circumstances, this will not happen, at least at the current summit.

🔸 All decisions within the framework of the «twenty», including a possible changes are made only by consensus.

🔸 The G20 includes Turkey, Indonesia (whose leaders even publicly and privately persuaded Zelenskyy to meet with putin in order to «negotiate peace»), Saudi Arabia and China, which has publicly warned that they will oppose the exclusion of russia from the G20.

🔸 Even earlier, due to the unleashed a war, the West also demanded to exclude russians from the prestigious economic club. However, Indonesia, which currently holds the presidency, refused to withdraw putin’s invitation.

☝️ So even in the absence of putin, his representative lavrov will participate in the summit and the preparation of its decisions.

✅ The kremlin expects that the summit of the G20 will be an event that will bring the kremlin out of actual international isolation. It is not excluded that at the last moment, putin will suddenly decide to come to demonstrate his strength and ability to negotiate with the first persons of the world. These hopes will remain futile in the event of such a scenario – the visit will only emphasize putin’s isolation. After all, the White House publicly warned that Biden has no intention of speaking with the russian president, and European leaders have also given no signals of readiness to meet with him. In addition, before the G20, putin suffered a major defeat and withdrew his troops from Kherson, which indicates a systematic defeat of russia at the front. Therefore, putin’s personal involvement is considered extremely unlikely. At the same time, the spokesman of the Air Force Command of the Ukrainian Armed Forces Yuriy Ignat does not rule out that during the G20 summit, the russian federation may carry out a massive missile attack on Ukraine.

✅ However, the analytical forecasts of individual publications («European Truth»), with reference to the so-called drafts of the final decision of the summit, emphasize the potential threats it poses to Ukraine.

🔸It is claimed that in the first point, the summit will define a list of the world’s main problems, which include not russia’s aggression, but the COVID-19 pandemic.

🔸 Despite the fact that the aggressive war was launched contrary to the requirements of the UN Charter and other world rules, the document seems to lack terms such as «russian aggression» and there is only one (!) mention of «war in Ukraine».

🔸 The thematic sections of the document also offer several references to abstract «geopolitical challenges» and «challenges to international peace and security» (without mentioning russia).

☝️ The specified information «dumps» have not been verified, but in the event that the russian federation can reduce the global security crisis to the issue of COVID-19, then the spear to focus its aggression on «geopolitics», this will be the defeat of the entire collective West and, in particular, of Ukraine.

☝️ Unfortunately, Ukraine does not participate in the preparation of G20 documents. However, there is already a tense dispute between the states that most actively defend the interests of Ukraine (the USA, Britain, France, Germany, Italy, Japan, Canada) and the states that are prone to compromises and concessions from the russian federation (these include, in particular, Indonesia, China, Saudi Arabia, India and Brazil, which have a wait-and-see position on this issue).

Indonesian politicians, including President Joko Widodo, are calling on Western leaders to make concessions on their criticism of russia to avoid the summit ending without a joint statement. US, European, Australian, Canadian and Japanese officials are among those being pressured by their Indonesian counterparts, diplomats said. In contrast to Indonesia, the newly elected Prime Minister of Great Britain, Rishi Sunak, called for using the G20 platform to publicly condemn the russian invasion of Ukraine and to ignore the speeches of the russians. Much depends on the results of the most important «backstage» event of the summit planned for today – the meeting between US President J. Biden and the leader of China, Xi Jinping.

❗️ During the summit, Western leaders still have a chance to completely abandon the joint statement and write in the most problematic «geopolitical point» that the EU and the USA have a different opinion from the rest of the G20 members.