Головна | Articles | Will winter affect the war in Ukraine?

Will winter affect the war in Ukraine? 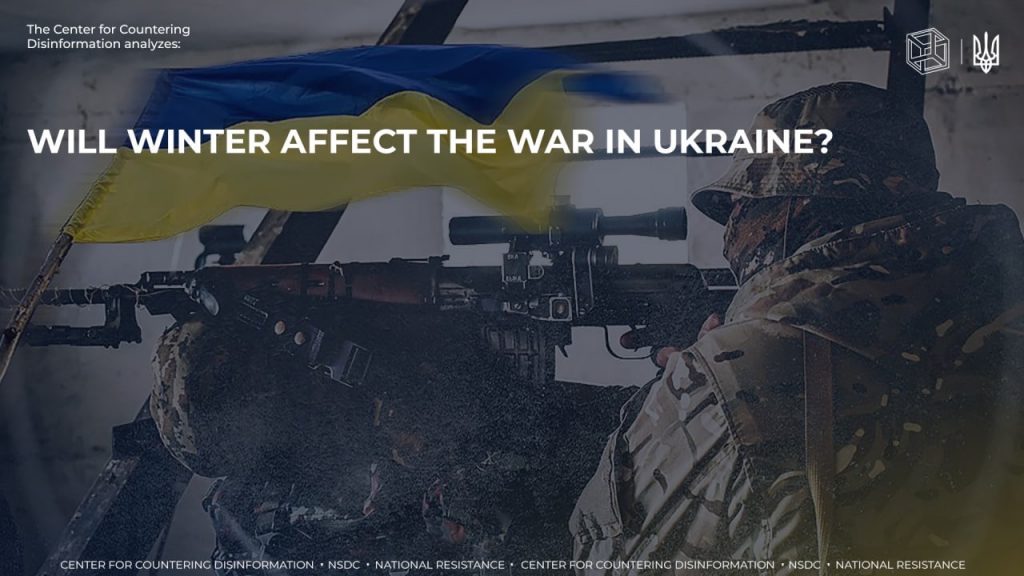 ❗️ Military analysts and experts both in Ukraine and abroad are analyzing the possible strategy of Ukrainians and russians in the winter period.

☝️ Mick Ryan, a retired major general in the Australian Army, gives his forecast of the impact of winter on the war in Ukraine. Based on similar winter military campaigns in Southern Afghanistan in 2006-2007, Korea (fighting near the Chosin Reservoir), World War II (Eastern Front, Battle of the Bulge, etc.), Ryan believes that:

✅ Russia will try to use the pause to its advantage. The new commander, General surovikin, will use the winter to plan offensive campaigns to be conducted in 2023. The main goal of putin’s appointment of surovikin to the highest military position remains the conquest next year of the rest of the territory that has not been conquered in the five Ukrainian regions annexed by putin in September. Therefore, the main activity of the russian military leadership will be the accumulation of ammunition stocks and the formation of experienced personnel for these future campaigns. Surovikin will revise the composition of the leadership of the russian troops in Ukraine, make certain changes in the organization of the ground forces, the distribution of key forces and means, and the main commanders of the invasion forces. However, in the conditions of the withdrawal of troops from Kherson and the lack of adequate human and material resources, this will be problematic. There are more and more reports that putin is preparing another «round» of mobilization on the battlefield of reservists due to the massive losses of the first wave. Thus, the kremlin expects to send about 100,000 more «fresh» russian troops to Ukraine by the middle of December. At the same time, it should be borne in mind that with the movement of such a large number of fighters, their management begins to fail and leads to losses. This has already happened near Kyiv, Chernihiv, Kherson and Kharkiv, and will certainly happen again.

✅ In order to put pressure on the Ukrainian authorities and force negotiations on the terms of the kremlin, the russian military will continue to attack Ukrainian troops, bases, infrastructure and power grids using missiles and drones. However, according to Ryan’s estimations, the specified strategy of total terror regarding energy facilities and gas pipelines will actually work against the kremlin, because it will make most European governments more determined in their support of the Ukrainian people.

✅ The Armed Forces of Ukraine will continue to destroy russian command and control facilities of the russian army and will try not to lose the initiative after the successful Kharkiv and Kherson offensive operations.

☝️ Other professional military personnel and experts give their vision of the development of events in the coming months:

✅ Ben Hodges, the former Commanding General of US Army Europe, believes that in winter the Ukrainian army will continue its counteroffensive and will put pressure on the occupiers, but the pace will slow down. He emphasized that the Ukrainian army is better prepared, so it will definitely succeed in winter, because, in his opinion, the russian military is not sufficiently equipped, unprepared and untrained.

✅ Military expert Oleg Zhdanov also believes that combat operations will not subside in winter, but will be active, and the frosty, dry weather will allow the Armed Forces of Ukraine to carry out combat tasks and carry out counteroffensive actions in certain areas and directions. After all, after the expulsion of the russians from Kherson, Ukraine shows no signs of stopping the offensive for the winter, or that the war will reach a stalemate. In the East, Ukrainian troops continue to advance and repulsed repeated attempts by russia to seize cities such as Bakhmut and Pavlivka, and in the South, the Armed Forces of Ukraine are striking deep in the rear of russian troops on the eastern bank of the Dnipro, opposite Kherson.

✅ Politically, the Ukrainian authorities, led by the President, will try to preserve the military, humanitarian, intelligence and financial support of the West for their country during the winter. Ukraine’s president will continue to consult with Western leaders on the implementation of his 10-point plan to end the war, which he presented at the G20 meeting last week.

✅ The fight against russian information operations will be intensified, which will try to convince Europeans that their high winter heating bills are connected with their support for Ukraine.

✅ The Ukrainian authorities will try during this winter to prevent initiatives to start negotiations with the russians in the near future. Given the dynamics of the deployment of military forces on the battlefield and the abhorrent behavior of the russians at all levels during their invasion, there is no rational reason for Zelenskyy to agree to negotiations now.

✅ Justin Bronk, a senior researcher in Military Sciences at the Royal United Services Institute for Security Studies, believes that Ukrainian special operations forces and guerrilla forces will maintain a stable dynamic of small-scale attacks in russia’s rear. This is confirmed by the fact that Ukraine continues to strike in the deep rear of russian troops. There are reported about missile strikes against russian forces regrouping at several locations along the eastern bank, and also about the blows inflicted in recent days on the southern cities of Melitopol and Henichesk, located near the Black Sea coast, more than 40 miles from the front.

☝️ Chairman of the Joint Chiefs of Staff of the United States, General Mark A. Milley, suggests that in winter both sides will take an operational pause due to the fact that low temperatures, roadlessness, rains reduce combat activity and complicate the movement of equipment and logistics. I. Stupak, an expert at the Ukrainian Institute for the Future, believes that the russian military hopes to spend winter in Ukraine and expects that the snow and frost will slow down the offensive of the Armed Forces of Ukraine, and then they will be able to rest. To do this, the russians are trying to create a conditional demarcation line in the war zone and strengthen it with trenches and anti-tank concrete fortifications. It is predicted that everything at the front will turn into long-term artillery duels, and full-scale combat operations on the part of Ukraine will resume in the spring after a sufficient concentration of forces to conduct a large-scale offensive operation in the direction of Melitopol in the South or in the East, continuing the offensive that pushed russian troops out of the Kharkiv region. However, Ukrainian military expert P. Chernyk does not rule out the possibility of the new russian offensive from the North, given the latest news about military activity in Belarus.

❗️ Despite the variety of expert forecasts, it is obvious that the arrival of cold weather will not stop the war, but will change its pace and will be used by both Ukraine and russia to plan large-scale military campaigns in 2023. Both sides will look for ways to gain an advantage over the opponent, gain territory, diminish the potential of the other side, and undermine its morale.