Головна | Articles | What propaganda’s «manuals» is the kremlin promoting now

What propaganda’s «manuals» is the kremlin promoting now 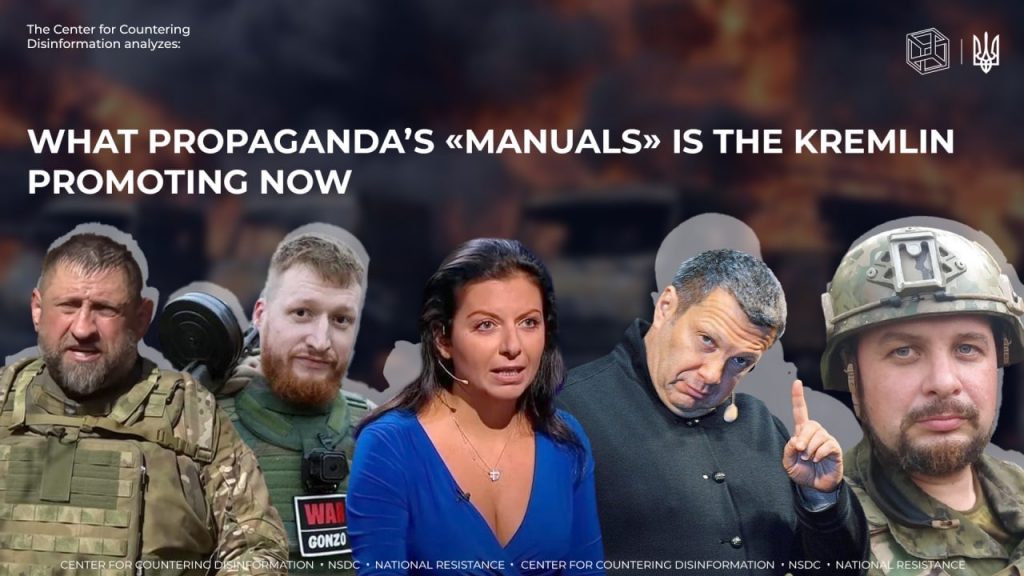 Propaganda is given huge funds to zombify residents of the aggressor country and pro-russian collaborators in Ukraine. The administration of the President of the russian federation on anongoing basis distributes the so-called «manuals» where the media imposes the necessary topics and discussions, which must be discussed on airwaves and Telegram channels.

In this way, russian propaganda tries to shift the focus of attention from the problems of the «special military operation» to the justification of the occupiers’ failures at the front in Ukraine.

❓What are the efforts of all russian ideologues currently aimed at, and what narratives do the «dark houses» contain for distribution by the racist mass media and their controlled social networks?

❗️First: the attempt to break up Ukraine with neighboring partners traditionally occupies an important place in the narratives of russian propaganda. The situation on November 15, when two people were killed in the border village of Przewodow during large-scale russian missile attacks in Poland, became a «gift» for russian propaganda. Although the investigation into whether it was a russian missile or whether it was the result of the work of the Ukrainian air defense system is still ongoing, russian propaganda focused on the seemingly deliberate shelling of Polish territory by the Ukrainian armed forces.

But another attempt to quarrel friendly peoples turned out to be unsuccessful. The Polish authorities, the opposition and society have admitted that even if it is proven that a Ukrainian anti-aircraft missile hit a Polish village, russia is responsible for the tragedy as a terrorist aggressor state that attacked Ukraine.

🔶As the results of the United Surveys poll in Poland showed, the majority of Poles (70.3%) confirmed that Ukrainian-Polish relations will not change after the incident.

Ministry of Infrastructure and Regional Development, responded to the blackmail of Gazprom to reduce the supply of russian gas due to Ukraine’s baseless accusation of stealing gas intended for Moldova from the Druzhba gas pipeline. He assured that all russian gas reaches Moldova, therefore the accusations of «Gazprom» about the «settlement» of «Moldovan» gas in Ukraine are groundless. The minister noted that Moldova uses Ukrainian gas pipelines to accumulate gas reserves. In turn, the Ukrainian «Naftogaz» proved that since the beginning of September, Moldova began to implement virtual reverse at the points of connection with Ukraine. At the same time, the transfer of all gas volumes for Moldova is documented.

❗️Second: in order to divert putin’s anger away from himself, the command of the russian army blames all the troubles of the «special operation» on russian soldiers who surrender to Ukrainian defenders. Also, during the last week, russia has been actively spreading on social networks a video of dubious origin about the execution of the «Wagnerian» Nuzhin and a video in which the soldiers of the Armed Forces of Ukraine seem to be shooting russian prisoners of war. With the help of such «evidence», propaganda tries to suggest to russian soldiers that it is better not to surrender to them.

In particular, on November 18, the russian mass media spread a fake story that soldiers of the Armed Forces of Ukraine allegedly shot russian invaders who had surrendered. In fact, although the researchers of the American edition of The New York Times confirmed the authenticity of two video recordings that allegedly showed the «shooting of Russian prisoners of war», the circumstances of these events were completely different from what russian propaganda tried to present. In fact, in the situation with the captured invaders, the Ukrainian military acted in self-defense – the invaders were killed after one of the russians unexpectedly opened fire on the soldiers of the Armed Forces of Ukraine during the capture. That is, the military of the russian federation did not intend to surrender peacefully, but deceived the Ukrainian military, who believed them. Dmytro Lubinets, the Commissioner for Human Rights of the Verkhovna Rada of Ukraine, said that Ukrainian law enforcement agencies and experts are studying the origin and authenticity of the video, but it is already possible to claim that the russians staged a fake surrender on the video, which is a war crime. According to Iva Vukushych, an expert on criminal prosecution of war crimes from Utrecht University, the actions of the occupier who opened fire can be considered a simulation of surrender or non-combatant status in order to deceive Ukrainians and, according to the Geneva Conventions, can be considered a war crime. It is characteristic that the incident, which is on the video, probably took place on November 12, but russian propagandists began to promote it only a couple of days ago, because before that another news was «popular» in russia – how the russians executed their own citizen Nuzhin.

✅ In a similar manipulative style, russian propaganda commented on November 12 video on the GRAY ZONE Telegram channel associated with the PMC Wagner, apparently showing the execution of a recruited russian prisoner Nuzhin, who had previously surrendered to the Armed Forces of Ukraine, with a sledgehammer. The murder is presented in the publication as «punishment of a traitor», and the owner of PMC Wagner prigozhin called the video «a great director’s work» on the morning of November 13. However, soon the russian propaganda turned the story of Nuzhin’s execution into a pretext for accusing the Ukrainian side that Kyiv «did not ensure the safety» of the prisoner during the exchange and handed him over to the Wagnerites. The authenticity of the video remains in doubt, russia is promoting a fake that Nuzhin was allegedly kidnapped in Ukraine by russian special services and taken to russian-controlled territory.

The message of such information «dumps» for the russian military is clear – continue to fight for putin’s idea of ​​«denazification» of Ukraine, otherwise you will either be killed by the Armed Forces of Ukraine during the surrender, or, in case of betrayal, they will kill their own, or in the case of voluntary surrender – you will go to prison for 10 years. However, such manipulative informational «throws» in no way solve the problem of surrendering the russian military as prisoners, but only additionally demoralize them.

❗️Third: after the most massive missile attack on Ukrainian energy on November 15 and blackouts throughout the country, russian propaganda began to actively create a picture of discontent in Telegram channels and encouraged people to go to protests. In Odesa, the local pro-russian public began to publish dozens of appeals from allegedly outraged residents, which followed the imposition of the false idea that Odesa is a russian city where fascism must be defeated, and that «Kievlians» and «Lvivians» are completely foreign people who do not care.

🔻The russian Telegram channel, which publishes methods for russian information attacks, spread fakes about the sale of Ukrainian electricity abroad and a «cartoon» with an appeal not to pay bills.

🔸Propaganda activity, aimed at shaking up the situation within the society, led to the blocking of roads in the city on the night of November 18. The spread of information about the protests led to the fact that residents of other regions expressed a generalized prejudice against all residents of Odesa who allegedly cannot understand that there is a war going on in Ukraine. Subsequently, «pictures» with protests were used for russian propaganda channels, creating conditions for discord and protests.

❗️Fourth: the fabrication of fake news about the suppression of forced migrants in Europe, the lack of Western weapons for the Armed Forces of Ukraine, protests in Europe against their provision to Ukraine, and the general fatigue of Western leaders from Ukrainian problems continue to be relevant for Russian «dark people».

🔸Judging by the directions of aggressive propaganda deployed in the information space, the kremlin’s methods are working well. Pro-kremlin propaganda, with the help of various manipulations, confidently, even without a hint of neutrality, continues to «iron the minds» of its citizens, trying to delay the inevitable defeat of the putin regime.