Головна | Articles | What does the verdict on the МН17 mean for Ukraine, russia and the world

What does the verdict on the МН17 mean for Ukraine, russia and the world 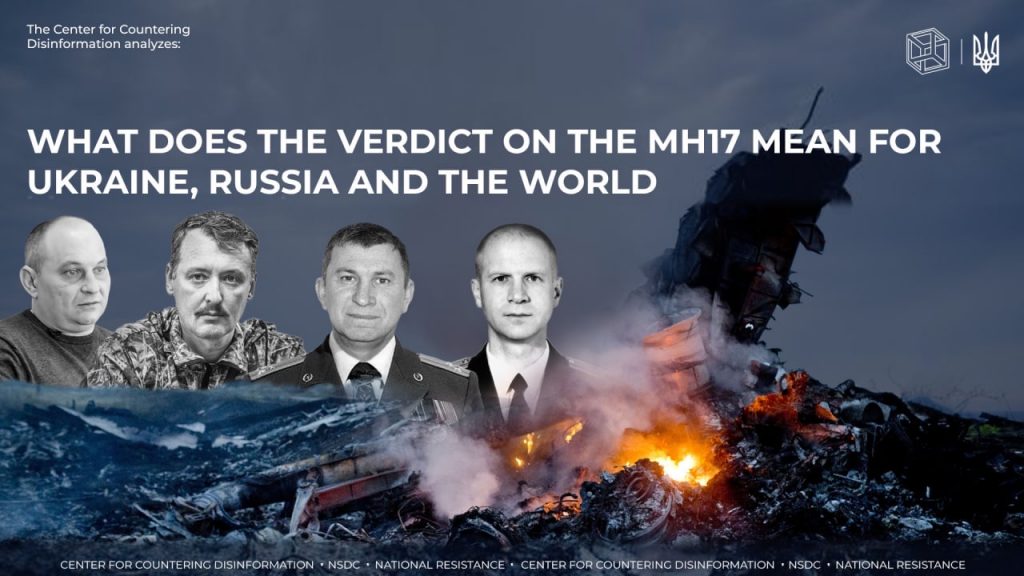 ❗️ On November 17, judges in the Schiphol Judicial complex of District Court of The Hague passed a verdict in the case of the Malaysian Boeing 777 flight MH17, which was shot down in the sky over the occupied eastern Ukraine.

☝️ On July 17, 2014, Boeing 777 of Malaysia Airlines was performing scheduled flight MH17 on the Amsterdam–Kuala Lumpur route. Near the village of Hrabove (on the territory of the Donetsk region, under the control of russian forces), the plane was shot down by the Buk surface-to-air missile system. All 298 people on board died, including 193 Dutch citizens (one passenger also had US citizenship), 42 Malaysian citizens (28 passengers and all 15 crew members), 27 Australian citizens; 12 Indonesian citizens, 10 British citizens; 4 citizens of Germany, 4 citizens of Belgium, 3 citizens of the Philippines, 1 citizen of Canada, 1 citizen of New Zealand. There were 80 children among the passengers. The plane crash became one of the 10 largest in the history of aviation.

The criminal and technical investigation of the MH17 case was undertaken by a specially created Joint Investigation Team, which included representatives of law enforcement agencies from the Netherlands, Ukraine, Malaysia, Australia and Belgium. Russia refused to send its representatives to this group, which it called politicized and biased. The international investigative team that conducted the investigation was headed by Dutch prosecutor Fred Westerbeke.

The first hearing at the District Court in The Hague was held on March 9, 2020, and the substantive hearing of the case began in June 2022. The investigative team performed a huge amount of work (analyzed more than 5.5 billion pages of information on the Internet, studied more than 1.5 million phone calls in the vicinity of the missile launch and along its route, questioned more than 260 people as witnesses, conducted more than 3,000 various expert interviews researches), as a result of which all alternative versions were rejected and only one remained, which is confirmed by all the collected evidence and testimonies. Namely, the Boeing 777 flight MH17 was shot down by a surface-to-air missile from the Buk air defense system, which was in service with the 53rd anti-aircraft missile brigade of the air defense forces of the russian Armed Forces (place of deployment – near Kursk). On July 13, on the eve of the disaster, air defense systems were transported to the occupied part of eastern Ukraine through a section of the border with the russian federation not controlled by Ukraine. That same night, this «Buk» was returned to russia.

❗️ Three citizens of the russian federation and one citizen of Ukraine have been identified as accused in the attack on MH17 by the joint investigative group:

✅ Russian citizen i.hirkin («strelkov») is a former FSS officer, at the time of the downing of the plane he called himself the «Minister of Defense» of the «CADR». According to the investigation, it was he who, shortly before the disaster, appealed to the russian «authorities» in Crimea and moscow with a request to provide heavy weapons. In addition, he is involved in the transportation of the «Buk» from russia to the territory not controlled by Ukraine and back, after the release of the MH17 missile from the air defense system;

✅ citizen of Ukraine l.kharchenko («Mole»), according to sources of the BBC, has currently received russian citizenship) – «commander of the intelligence unit of the CADR, who was next to the Buk immediately after MH17 was shot down from it and after the attack on the passenger Boeing 777 passed the order to send the air defense system back to russia.

From the very beginning of the investigation, russia denied any involvement in the downing of MH17 and lobbied for the investigation of alternative versions, which amounted to blaming Ukraine for the disaster.

❗️ The trial that took place in the Netherlands became unprecedented. For his sake, the criminal procedural legislation of the Netherlands was even changed (in particular, hearings were allowed to be held in English, court rules were changed in the absence of the accused). The court found convincing evidence that flight MH17 was shot down by a Buk missile, which was brought from russia to Ukraine, and then taken back, and that the russian military controlled the CADR during the downing of the airliner.

On November 17, the District Court of The Hague found hyrkin, dubynsky, and kharchenko guilty of the Malaysian Boeing crash and sentenced them to life imprisonment. The court decided to arrest them and pay more than 16 million euros in compensation to the families of the victims. The fourth defendant, pulatov, was found not guilty. The verdict in the case was read in the absence of all four defendants, who are wanted internationally.

☝️ The reaction to the verdict of The Hague in russia and the world community was predictable.

✅ Ukraine welcomed the verdict in the MH17 case. The President of Ukraine emphasized the need for the perpetrators of this crime to be brought to justice. Advisor to the head of the President’s Office, M. Podolyak, considers it important that the guilty bear real responsibility and go to the prison

✅ In the official statement of the US State Department, the verdict of the court in The Hague was called a «serious step», but noted that there is still a lot of work ahead to bring all the guilty to justice. Thomas Shansman (father of 18-year-old Quinn, who was the only American on board the plane) welcomed the verdict and emphasized its importance: «I’m glad to hear that the court ruled that russia is responsible».

✅ Prime Minister of Australia Penny Wong demands from vladimir putin to extradite those convicted in the case of the MH17 accident and not to hide the killers.

✅ The russian Foreign Ministry reacted hysterically to the court’s decision and declared that they do not recognize the sentence of District Court of The Hague, because «it was based on a political order»and «a politically motivated conclusion was imposed on the court». The department accused the court of «adjusting the appropriate evidence base for the indictment»and «disregarding the facts that contradict it». The russian Foreign Ministry also repeated the narrative of «unprecedented pressure» on the court by Dutch politicians, representatives of the prosecutor’s office, and the media. The Chair of Federation Council Committee on Constitutional Legislation and State Building A. Klishas stated that the russian federation will not extradite the russians convicted in the MH17 case to the Netherlands, apparently due to a direct constitutional ban on the extradition of russian citizens to foreign countries.

❗️ The decision of the District Court of The Hague regarding the shooting down of flight MH17 became a landmark event for the West and proved that russia is a terrorist state, and as long as it continues to commit its crimes, no one can be safe. It was the MH17 disaster, the vast majority of passengers of which were Europeans, that changed the EU’s attitude to the war against Ukraine. Many of those who, until July 17, 2014, believed that this was a «foreigner’s war» realized that it was also a war against them. After all, although formally the court found russian puppets led by i.hirkin guilty, in reality the kremlin authorities led by putin and his henchmen are behind this crime.

☝️ Today it is clear that the trial that has just ended will not be the last in the case of the Boeing disaster, and later there should be cases against other defendants in the disaster. This was confirmed by the head of the International Investigation Team, Fred Westerbeke, who stated that his task is to «expose the entire chain – from the Buk crew to those who ordered this Buk to go on a mission on July 17, 2014». According to Westerbeke, his group has information on about a hundred people connected to the MH17 crash. The Dutch prosecutor’s office stated that it considers V. Tsemakh, who in the summer of 2014 was a so-called anti-aircraft gunner, to be a suspect in this case of the CADR army (after being arrested by Ukrainian security forces, he was extradited to russia as part of a prisoner exchange). Other persons involved in the downing of the plane are called the chain of command in the russian federation – from the first deputy head of the border service of the FSS a.burlak to the commander of the 53rd Air Defense Brigade of the Armed Forces of the russian federation, colonel s.muchkaev (according to the investigation, «Buk» this very brigade on July 17, 2014, found himself in a field near the city of Snizhne). According to Ding van Butzelaar, the head of the investigative team investigating the MH17 accident, the prosecutor’s office will make a decision on opening other cases related to the Boeing crash at the beginning of next year.