Why Tehran refused cooperation with moscow 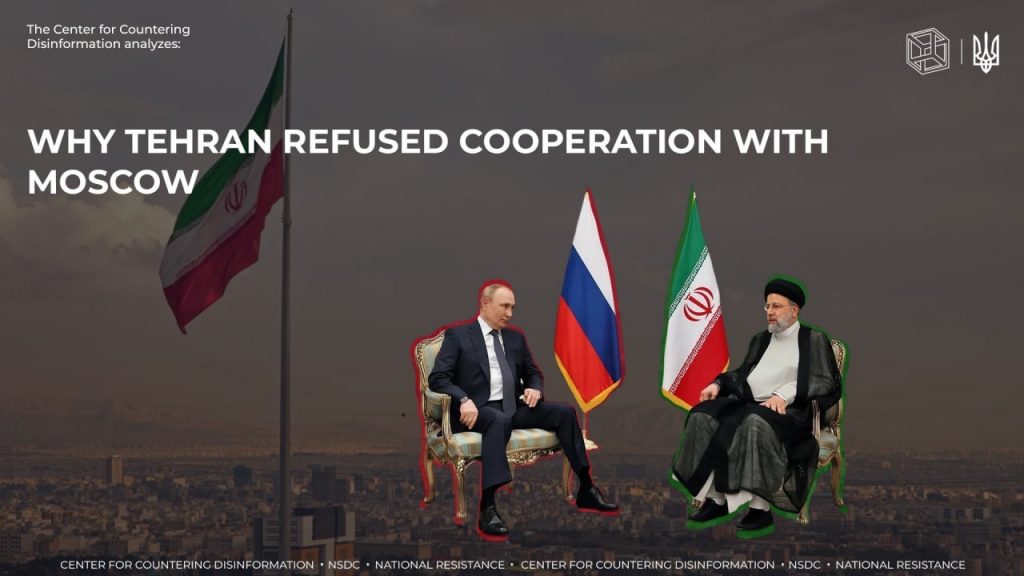 ❗️ Iran admitted for the first time that it supplied drones to moscow, but said they were sent before the invasion of Ukraine, where russia uses drones to strike power plants and civilian infrastructure. Before that, the Iranian side rejected any accusations regarding the supply of weapons to the russian federation. At the same time, Iranian officials denied that the provision of weapons violated a UN Security Council resolution and said that the territory of using drones is «not the seller’s problem».

☝️ Although since the beginning of the full-scale war, Iran has publicly declared a position of neutrality and advocated a ceasefire and a political-diplomatic settlement, russia is massively using kamikaze drones for strikes against Ukraine, which experts identify as Iranian Shahed-136, and russian forces use them under named «Geranium». Iranian Foreign Minister Hossein Amir-Abdollahian confirmed that a «small number» of drones were provided to russia months before russian forces invaded Ukraine on February 24. Amir-Abdollahian denied that Tehran continues to supply drones to moscow. The minister also said that Tehran and Kyiv agreed to discuss allegations of using Iranian drones in Ukraine and if it is proven that russia used Iranian drones in the war against Ukraine, Tehran «will not remain indifferent». The former ambassador of Iran to the russian federation, Nematollah Izadi, suggested that there was no proper cooperation between the military and the Ministry of Foreign Affairs of Iran, which is why the diplomatic service didn’t know about the supply of drones to russia. In his opinion, one part of the government considered it profitable to sell weapons to moscow, but Iran «succumbed to an operation of deception by russia, which does not serve our national interests at all».

❓Why have the persistent public calls from Tehran to Kyiv regarding the supply of weapons to russia increased with the goal to resolve the conflict?

✅ Due to the supply of drones to russia, which it uses in the war with Ukraine, internal disputes began in Iran. Several influential people have already publicly spoken against it. Thus, Iranian newspapers widely circulated the statement of the editor of the Iranian newspaper Jomhouri Eslami, Masih Mohajeri, who openly criticized the government’s position regarding the weapons it supplies to moscow. He stated that Iran should on an official level advise russia to comply with international law and prohibit the russian federation from using Iranian drones if they were supplied before the start of the war, and maintain closer relations with Ukraine. Mohajeri also addressed the Iranian Foreign Minister Hossein Amir-Abdollahian  with the question «why the government didn’t openly condemn the russian aggression and why it doesn’t make efforts to become mediators between Ukraine and the russian federation?»

✅ Iran was afraid that providing weapons to russia to wage a full-scale war makes it an accomplice to aggression and war crimes on the territory of Ukraine. In fact, russian-Iranian cooperation isn’t reliable, but takes place only when both sides need to solve a common problem. Currently, russia and Iran are united by their mutual hatred of the USA and NATO. However, Tehran and moscow have significant strategic differences. Thus, Iranian and russian businesses compete in the same sectors of the Syrian economy, hoping to gain some economic benefit. Tehran is deeply offended by moscow’s failure to intervene when Israel launched airstrikes against Iran-linked rebels.

In the oil industry, Iran and russia remain rivals, constantly trying to capture market share. US and EU sanctions on russian crude have forced moscow to attract buyers with deep discounts, about $20-$30 below market value, crowding out Iranian oil from the Asian market. As a result, the export of Iranian crude oil to China, which is the main sales channel, has decreased by more than a third compared to the period before the war in Ukraine. Iran is forced to look for new buyers, which is quite difficult due to secondary US sanctions, or to offer even bigger discounts than russia.

✅ The change in Iran’s position was facilitated by the words of Biden, who announced the possible «quick» release of Iran. Against the background of instability in Iran itself and external confrontation with all its neighbors, this is a very tangible threat, because the Iranian military power of Iran is not as strong as it tried to appear. Amid confirmation by US intelligence of Iran’s plans to attack Saudi Arabia and northern Iraq, the US has raised the level of combat readiness of its armed forces and expressed readiness to respond to an attack by Iran. The «russian case» currently only exacerbates the problem and the likelihood of a military conflict with the USA and NATO.

✅ Iran expects to use the refusal of moscow’s military requests in exchange for the relaxation of international sanctions.

☝️ It is necessary to be very careful with the official statements of Iran. After all, Ukrainian military intelligence received information that Iranian drones were produced and supplied to russia after February 24. At the same time, russia not only paid Iran 140 million euros in cash for kamikaze drones, but also provided several samples of Western weapons obtained during the war.

❗️ Despite the fact that the position of the russian federation on the world stage has deteriorated significantly, the kremlin will continue to try to use its ties with Iran as a source of influence on Western states (especially the United States) and replenishment of depleted domestic weapons stocks. It is not for nothing that the Secretary of the National Security Council of russia m.petrushev arrived in Tehran on November 8, where under the guise of the official purpose of discussing russian-Iranian cooperation, the potential sale of Iranian ballistic missiles to russia will probably be discussed. Currently, Iranian instructors are conducting training for the occupiers on the territory of Belarus, Kherson region and Crimea.

☝️ However, given the geopolitical climate and the opportunity for the Islamic Republic to take advantage of russia’s predicament, there is every reason to believe that in the near future Tehran will avoid any public steps that could lead to further escalation in Ukraine through the supply of Iranian military equipment.