How the russian federation is destabilizing the situation in Moldova 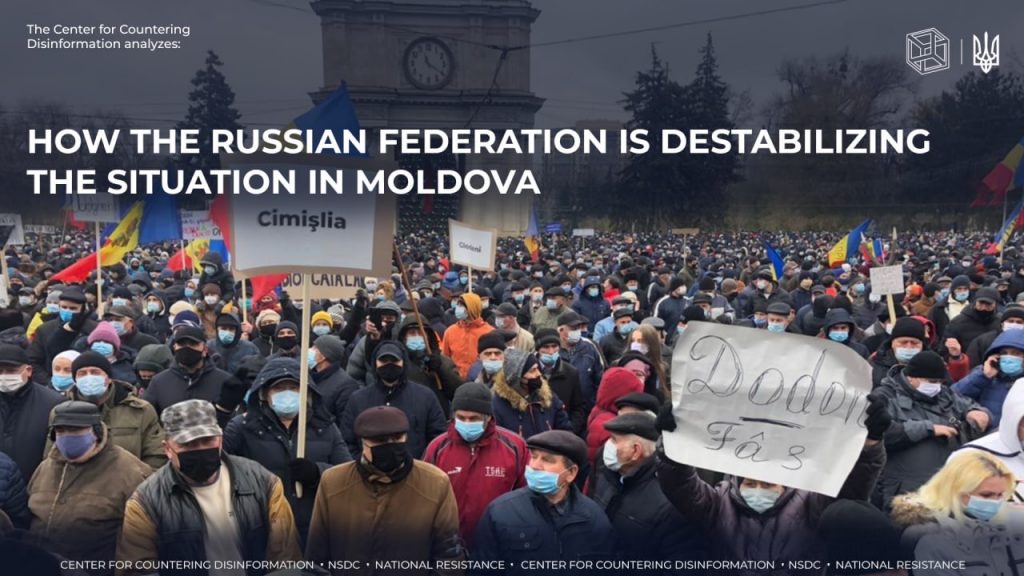 The tension in the self-proclaimed «Pridnestovian Moldavian Republic» allows us to ascertain moscow’s plans to create a new hotbed of instability near the borders with Ukraine. Everything suggests that the kremlin plans to use Transnistria as an additional springboard for russian aggression against Ukraine.

According to the President of Moldova, Maia Sandu, putin is trying to destabilize the situation in the country with the help of corrupt groups and pro-russian parties that work for the russian special services.

☝️ The Association of Investigative Journalists of Moldova RISE Moldova published an investigation that proves that a decision has already been made in russia about a possible annexation of Moldova, and the FSS of the russian federation prepares a «second front» in the territories of Transnistria and Moldova. For the investigation, the journalists examined numerous documents and phone calls, including a secret note from an expert of the general staff of the russian army, as well as photos and videos obtained from a source close to a high-ranking FSS official.

🔸 The international activities of the FSS of the russian federation became especially active against the background of the war, and the main object of the FSS attack is currently Moldova. Since 2014, russians have been entering Moldova every year with diplomatic passports, which, judging by the serial numbers, were issued one after the other, as was the case with the GRU employees revealed after the Skripal poisoning. General d.milyutin, the deputy head of the Department of operational Information of the Fifth Department of the FSS of the russian federation, is considered the chief curator of Moldova on behalf of the FSS in the Moldovan, Ukrainian and russian security forces. The «Five» is precisely the unit whose reports guided the kremlin in deciding to launch a full-scale invasion of Ukraine in February 2022. According to RISE Moldova, it was he who was tasked with developing the idea of ​​opening a «second front» from Transnistria. Billings of mobile phone calls between milyutin and his management in moscow – the head of the Department of operational information of the FSS, generals g.grishaev and s.beseda (head of the Fifth directorate of the FSS) show that the agency’s coordination for work in the entire region, especially in the South of Ukraine, was carried out from the territory of Transnistria, where are the headquarters of the FSS.

❓ Why is the «Moldova» direction become so important for the kremlin?

🔸 The kremlin believes that Moldova is supposedly under the external control of Romania and the USA, and Maia Sandu is allegedly preparing to start the process of uniting Moldova with Romania, set up a blockade of Transnistria and start «military blackmail» of russia.

🔸 Moscow is trying to use the territory of Moldova as a possible springboard for hostilities against Ukraine and to divert the forces of the Armed Forces of Ukraine in this direction.

❓ How are they planning to invade these territories and who is helping moscow inside Moldova?

The russian leadership has several plans for taking control of Moldova, including:

🔸 Creation of a corridor to Transnistria through the South of Ukraine and recognition of the sovereignty of the temporarily occupied part of Moldova, which is called the «Transnistrian Republic» (now russia doesn’t officially recognize its independence).

🔸 Seizing the entire territory of Moldova with subsequent annexation to Transnistria.

🔸 Entry to the borders of Transnistria without its recognition.

🔸 To organize an energy and financial crisis in Moldova, and taking advantage of citizens’ discontent, to organize a state rebellion or early elections. Indeed, Moldova is particularly vulnerable to russian pressure due to its almost 100% dependence on russian gas and 30% on the supply of electricity. A more than five-fold increase in gas prices this year has hit the country’s 2.5 million population hard, with electricity bills now accounting for more than 60% of Moldova’s average household expenses. Due to the bombing of Ukrainian power plants, the Ukrainian import of electricity became impossible and Moldova had to turn to Romania.

❓What are the possible options?

Russia has already realized that the military plan to invade Moldova has no chance of success. After all, in all scenarios, there is a risk of losing influence on the rest of the territory of Moldova, and in the case of its complete occupation, there is a significant resistance of the population. The situation at the front doesn’t give russia any prospects to conquer Odesa, Mykolaiv, Voznesensk and unite with the russian troops who are illegally present on the territory of Moldova.

In these conditions, the kremlin switches to a hybrid war and continues to use the so-called tools. Soft power, aimed at a covert influence on the political life of Moldova and the promotion of various initiatives subversive for the authorities («referendums», «government in exile», «volunteer battalions» for the war against Ukraine, etc.).

And there are certain reasons for this.

✅ Under the influence of still strong russian propaganda and powerful pro-russian parties, a large part of the population (about 25%) continues to support the expansionist policy of the putin regime and consider the actions of the kremlin correct and justified. However, if a year ago the level of putin’s support was almost 50% in Moldova, now the percentage of those who openly support russia’s war against Ukraine is no more than 7% of the population.

✅ A pro-kremlin separatist region has existed on the territory of Moldova since 1990 – the unrecognized Transnistrian Republic, where a russian military base is located, the russian flag is used as the second state flag, and the PACE considers the region «a zone of Russian occupation». Here russia can train sabotage groups, as well as mobilize people for combat operations in Mykolaiv and Odesa directions.

✅ In Transnistria, on the territory not under the control of Moldova, the main headquarters of the FSS is located, where personnel are trained and coordinated for illegal work in the region, especially in the South of Ukraine. Today, this separatist region is considered difficult to access for the Moldovan and Ukrainian special services. Belief in success is reinforced by the fact that the state structures of Moldova remain full of kremlin agents, the FSS, the Foreign Intelligence Service, and the GRU.

✅ The influence of the so-called of the Moldovan department of the kremlin on the politicians of Moldova, for which the kremlin directs millions of dollars under the cover of the largest state-owned russian companies.

☝️ The previous pro-russian government of Moldova – igor dodon’s social party, which until now was the main friend of the kremlin and had russian funding due to his arrest. Now he has lost his influence.

Currently, the tool of russia’s global influence campaign is Ilan Shor – a Moldovan politician, the leader of the opposition «Shor Party», who is currently in exile in Israel. Before the 2021 elections in the Republic of Moldova, Shor, with the help of russian special services, tried to gain control over the parliament of the republic in order to adopt legislative acts in the interests of the russian federation. Under the leadership of milyutin, a group of FSS officers organized paid anti-government rallies of the Shor party demanding the resignation of the country’s pro-Western leader.

Shor’s wife, the pop singer sara, who was awarded the honorary title of honored Artist of russia by putin, on the eve of the 2021 elections, in cooperation with the press secretary of the kremlin d. peskov, developed detailed plans to undermine Maia Sandu and return Moldova to russia’s sphere of influence.

V. plahotniuk, a former official of the Moldovan government, who in the interests of moscow uses bribery of law enforcement officers to strengthen his control over the republic, remains a creature of the kremlin.

❓ How does the situation in Moldova concern Ukraine?

For Ukraine it is very important to have friendly relations with the government of the Republic of Moldova. The level of relations between Ukraine and Moldova has increased dramatically in the last two years, contacts are at absolutely all levels. It is for these reasons that the government of Moldova tries to help Ukraine in everything it can, but at the same time does not become part of the conflict.