Did Ukraine’s great expectations from the G20 summit come true? 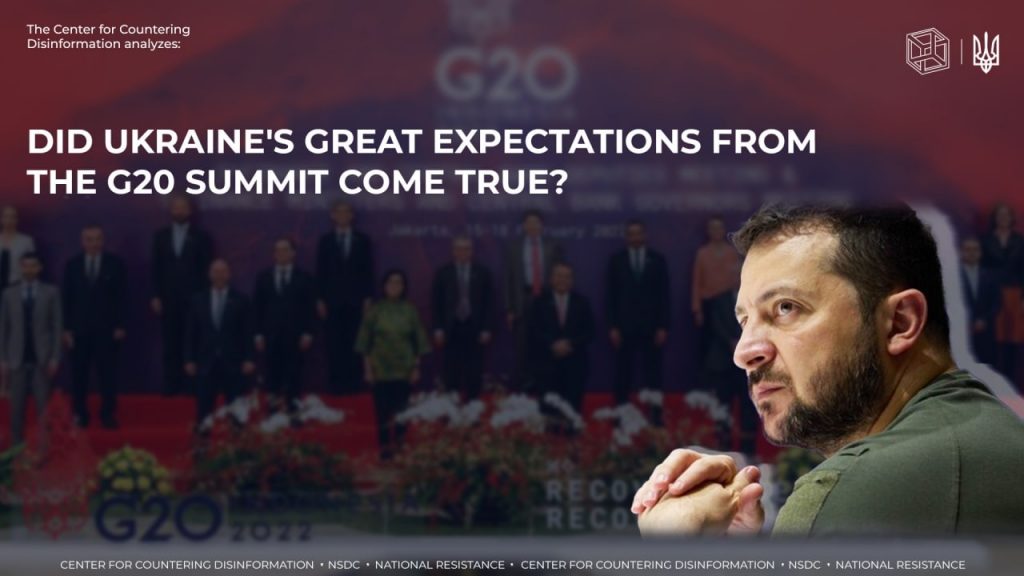 ❗️ On October 16, the summit of the G20 is ending in Bali, and the main intrigue was what the joint communiqué would be after the two-day meeting of the leaders of the G20.

☝️ As expected, in the final declaration, the text of which was published on the summit’s official website on November 16, the leaders of the G20 countries condemn russian aggression against Ukraine and demand its unconditional end. It was emphasized that the war in Ukraine causes enormous human suffering and is also a source of economic and humanitarian problems in the world.

In particular, the final document states:

✅ Most of the G20 leaders demand the complete and unconditional withdrawal of russian troops from the territory of Ukraine, as well as the cessation of all types of blackmail – nuclear, energy and food.

✅ The G20 approves the conclusion of an Agreement on the safe export of food and fertilizers from Ukrainian ports in the Black Sea, mediated by the UN and Turkey.

☝️ In their speeches on the sidelines of the summit, the leaders of the G20 noted:

✅ Chancellor of Germany O. Scholz: «It is absolutely unacceptable that putin continues his war in Ukraine and airstrikes».

✅The president of the European Commission U. von der Leyen reminded that the war unleashed by russia «is not only unjustified, unprovoked and illegal, it is causing immense suffering to Ukraine».

✅ Turkish President R. Erdogan warned the world against isolating the russian occupying country and declared that he would talk to putin again, because «the path to peace is through dialogue».

✅ The participants of the summit of the G20 condemned russia’s massive missile attack on Ukraine on November 15. The leaders of Canada, the European Commission, the European Council, France, Germany, Italy, Japan, the Netherlands, Spain, the United Kingdom and the United States met on the sidelines of the G20 summit and published a statement condemning the «barbaric missile attacks that russia has carried out on Ukrainian cities and civilian infrastructure».

✅ US National Security Council coordinator for strategic communications, John Kirby said that the world respects the position of Zelenskyy and the entire Ukrainian people, and the United States will continue to support the Ukrainian people and provide the necessary weapons to strengthen Ukraine’s positions.

✅ President of the European Council Ch. Michel said: «the best way to overcome the acute food and energy crisis is for russia to stop this senseless war and respect the UN Charter».

✅ The head of the World Trade Organization (WTO) N. Okonjo-Iweala warned that due to russia’s war against Ukraine, a number of large economies faced a real risk of slipping into recession and rising food and fuel prices.

✅ Prime Minister of the UK R. Sunak promised to expand support for Ukraine and declared that putin’s regime «will hear the chores of global opposition to the war».

✅ Although India expressed support for the territorial integrity of Ukraine and determination in the inadmissibility of the use of nuclear weapons and a peaceful settlement of the russia-Ukraine conflict, it refrained from direct condemnation of the russian federation.

✅ China became the most ambiguous player at the summit. Thus, despite the fact that Russia has repeatedly used «nuclear» rhetoric to threaten in the context of the war in Ukraine, Chinese Foreign Minister W. Yi, after the meeting with lavrov on the sidelines of the summit, declared russia’s «rational and responsible» position regarding nuclear war, readiness russia to resume implementation of the Black Sea Grain Initiative and openness to «negotiations and dialogue».

🔸 The events during the forum vividly illustrated how the attitude towards russia has changed since the beginning of the war. A week before the start of the world leaders announced that they will not take part in the official «family photo» during the meeting at the summit of the G20 due to general discomfort with the presence of russia at the summit. The diplomatic isolation of lavrov, who had a minimum of meetings (only with the head of the Chinese Foreign Ministry, the UN Secretary General and the Indian ambassador to the russian federation), has already become common for russians. True, the head of the russian Foreign Ministry boasted of «short conversations» with the President of France E. Macron and the head of the German government O. Scholz, however, neither the German nor the French sides confirmed this. The summit showed that even allies do not dare to openly support moscow’s intentions to continue the war in Ukraine, which has led to a rise in food and energy prices around the world and revived the threat of nuclear war.

☝️ Thus, the general content of the G20 final communiqué emphasizes the increasing international isolation of the russian authorities. At the same time, the document recognizes different views on aggression in Ukraine. In particular, the draft declaration of the summit of the G20 presents both Western and russian assessments of the situation around Ukraine, which are based on traditional kremlin narratives and accuse the G20 of trying to politicize the final declaration of the summit and, on behalf of the «Twenty», to condemn russia’s actions in Ukraine.

❗️ The most important result of the meeting of the leaders of the world’s largest G20 economies in Indonesia was the confirmation of Europe’s common position regarding Ukraine, that despite certain tensions between G20 members, putin’s russia remains under diplomatic pressure and does not have strong allies to support aggression against Ukraine.