Головна | Articles | Will the winter period freeze the war

Will the winter period freeze the war 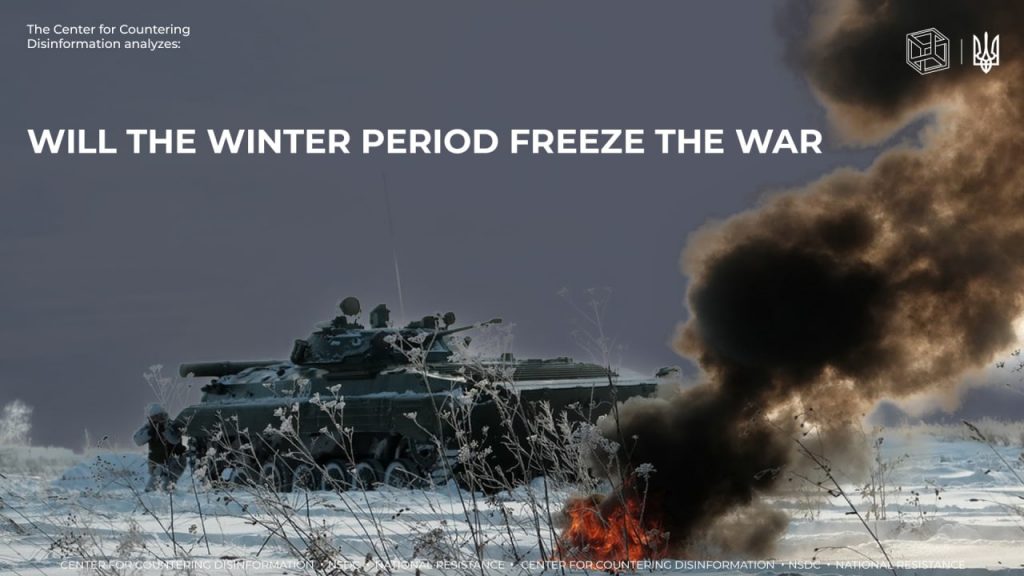 The nature of the war in Ukraine changed greatly with the onset of roadlessness caused by rains, and also due to the fact that the parties did not complete regrouping after the liberation of forces from Kherson. However, winter is ahead, which will change him even more. Both armies will now need different combat and survival skills. Both sides are already trying to solve problems related to low temperatures, inclement weather, precipitation and other features of the winter period. It is more difficult to fight in winter, and difficulties arise both in the russian army and in the armed forces.

But what will happen when the reserves are in place, and the ground freezes? Will the Armed Forces of Ukraine or the russian army be able to advance, or will the adversaries accumulate forces for active action in the spring? And most importantly, what to expect in the spring?

💭Western leaders express the following opinions in this regard.

NATO Secretary General Jens Stoltenberg believes that putin will try to use winter as a weapon, «but will not succeed». The Secretary General of NATO links the strengthening of Kyiv’s position with regard to possible peace negotiations with the military successes of Ukraine. «The best way to support peace is to support Ukraine», he said.

British Minister of Defense Ben Wallace emphasized the unpreparedness of the russian armed forces for combat operations and called on the Ukrainian troops to maintain the pace and continue the offensive during the winter months. «Given the advantage that the Ukrainians have in training, equipment and quality of combat personnel against the demoralized, poorly trained, poorly equipped russians, it is in the interests of Ukraine to maintain the pace during the winter. Unlike the russians, they have 300,000 units of arctic combat equipment received from the international community», Wallace believes.

Former US Assistant Secretary of State for Political-Military Affairs Brigadier General Mark Kimmitt said that Ukraine should continue its attacks on russian ammunition depots, command centers and supply lines during the winter and make the most of the pause to rebuild its combat power before the resumption of the 2023 campaign.

American political scientist Ramis Yunus believes that no one will pause in the war for the winter period, the Armed Forces of Ukraine will continue to put pressure on the occupiers, and the allies will support Ukraine.

🔻What will affect the development of events at the front in the winter period?

First of all, the actions of the military on both sides will be affected by the temperature regime of the Ukrainian winter and the preparedness of the armies for operations in cold conditions, because even a small layer of snow greatly limits the ability to move equipment, even tracked vehicles, on the road. In addition, snow, especially thin, can give away the location of the position, shelter, warehouse. In winter, it is more difficult to use aviation, because bad weather is more common in winter than in summer. Another problem of winter warfare is the short daylight, which makes patrolling and surveillance difficult.

🔻From a geographical and climatic point of view, a moderate climate prevails in most of Ukraine, although in winter there are severe frosts and snow, especially in the East and North-East of the country. There is no single theater of war in Ukraine. According to the statistics of temperature fluctuations of the past years in the three regions that appeared in military reports in recent weeks (Kharkiv, Donetsk and Kherson regions), the average temperatures in December, January and February in these regions are below zero degrees. The height of the snow cover in different areas on the front line varies greatly from year to year, in some winters there was no snow at all. According to the long-term forecasts of the Hydrometeorological Center of Ukraine, the winter of 2022-23 will be warmer than usual, the average temperature from December to February will be 1-2 degrees higher than for the period from 1991 to 2020, the probability of a prolonged cooling in Ukraine is minimal, but there may be frost lasting from one to five days.

According to the forecasts of Severe weather Europe, based on the calculations of the European Center for medium-term weather forecasts, the snow cover in many areas of Ukraine, including the South of Kherson region, will correspond to the norm, in the Donetsk and Kharkiv regions and will be a little thinner, however, snowfall and even blizzards should be expected in Svatovo region. There are a few other factors that affect combat effectiveness – these are wind and humidity. Many soldiers consider the most unpleasant temperature to be close to zero due to the fact that the snow melts and flows into the trenches. That is, you need high-quality windproof suits with a membrane and modern winter boots.

🔻The success or failure of winter military campaigns often depends on the ability to survive in conditions of low temperatures, that is, on the level of provision of winter equipment, sleeping bags and tents and appropriate tactical training of personnel for combat operations in frosty conditions. These include the use and care of clothing and equipment, the use of snow for shelter and protection, and the ability to navigate snowy terrain. The same applies to the level of provision of special lubricant for weapons, wheel chains, chemical heaters, electric and conventional stoves, generators,stuff for cooking, the ability of equipment and technology to work at low temperatures, etc.

Subzero temperatures have a detrimental effect on electrical devices, primarily lithium batteries used by the military in radio stations and quadcopters, which threatens the loss of communication and data of reconnaissance drones and aerial repeaters.

💭 According to experts, the Ukrainian army is now better prepared for winter than the russian army, due to the fact that warm clothes and other winter equipment began to appear on the lists of Western supplies to Ukraine in the fall. In September, Belgium announced such receipts, and in early October, Canada announced that it would deliver 400,000 units of various items of winter clothing to Ukraine. Germany promised to provide tens of thousands of winter jackets, pants and hats at the same time. 35,000 sets of winter uniforms were handed over by Lithuania, 25,000 by Great Britain. Blankets and warm clothes were supplied by Israel and Finland. The supply of warm winter clothes to Ukraine was also announced at a briefing in the Pentagon. The Armed Forces of Ukraine have enough experienced veterans who have spent more than one year at the front, but there was and is no special winter training program.

The landscape of the area also affects the planning of winter military campaigns. In particular, in the South – from Mykolaiv to Kherson and in the Donetsk agglomeration, the terrain is mostly flat without hills, there are practically no forests and plantations. For the Luhansk region, especially Soledar, where the battles are taking place, on the contrary, hills, ravines, rivers, streams are characteristic.

The liberation of the right-bank part of the Kherson region affected the tactics used by russian aviation. With the onset of winter, Moscow began massive missile attacks on Ukraine’s energy infrastructure in order to provoke public dissatisfaction with emergency power outages. Therefore, the safety margin of Ukrainian air defense and the readiness of Ukrainians to withstand electrical disturbances become decisive.

🔻 Summarizing everything what has been said, it can be stated that both sides have reasons to carry out offensive actions.

At the end of the summer, Ukraine managed to seize the strategic initiative and proved that it is capable of advancing in the East of the country in the Kharkiv, Donetsk and Luhansk regions, as well as in the South, where after a series of breakthroughs near Kherson, the russian group was forced to leave the right bank of the Dnieper. The Ukrainian military has a real chance to use its advantage and prevent the russian federation from equalizing the situation at the front.

💭According to Israeli military expert David Handelman, in a strategic sense, the most attractive for the Armed Forces of Ukraine would be an attack from the Zaporizhzhia direction on Melitopol with the aim of opening the land corridor to Crimea – the success of such an attack would drastically complicate the position of the russian group in Crimea and on the left bank of the Kherson region, first of all, in the context of logistics. According to him, now everything depends on the preparation of additional Ukrainian reserves and the supply of Western weapons and winter equipment.

In the kremlin, the russian army, after a series of major retreats and casualties, is waiting for some kind of success to compensate for the disappointment of the war. Russia was able to send reinforcements to the frontline units, but the haste with which it was done practically eliminated the tactical training of new soldiers. At the same time, there was a shortage of winter uniforms, weapons and means of protection among russians mobilized in October. Judging by numerous video appeals, the mobilized, with whom the russian army is trying to fill the shortage of personnel on the front lines, are often forced to buy clothes and even protective equipment at their own expense. Russian tactics currently consist rather in attempts to break through the well-prepared defense of the Armed Forces of Ukraine.

However, after the russian group withdrew to the left bank, russia may no longer keep as many combat-ready units on this territory as before.

According to the Israeli expert, the main intrigue of the situation on the fronts in Ukraine is where and how quickly the liberated units will be sent.

Despite the fact that in this war there have already been several events that fundamentally changed the situation, the experts of the Economist have predicted scenarios of how the military situation in Ukraine could develop next year.

1️⃣According to the first (unlikely) scenario, the front line will stabilize in the winter, russia will accumulate reserves and go on the offensive in the spring. The flow of American aid is blocked by Republicans in Congress, European aid runs out, and Ukraine, having lost Kryvyy Rih, Sloviansk, and Kramatorsk, agrees to an armistice. Russia uses it to rearm its army and prepare for a new war.

2️⃣The second scenario envisages a situation when neither side can win a decisive victory at the front, the war freezes indefinitely.

3️⃣The third scenario considers the possibility of an offensive by the Armed Forces of Ukraine in winter, including a breakthrough of the russian defense in the Luhansk region. In the spring, the Ukrainian army begins its movement in Zaporizhzhia, surrounds Mariupol and approaches the Crimean border.

It is difficult to predict whether any of these scenarios will come true, and whether everything will happen at all as noted in the Economist is unknown. But one significantly – one must believe in the Armed Forces of Ukraine and hope for the best, because our troops have already repeatedly proven their superiority in the war with the «second army of the world».