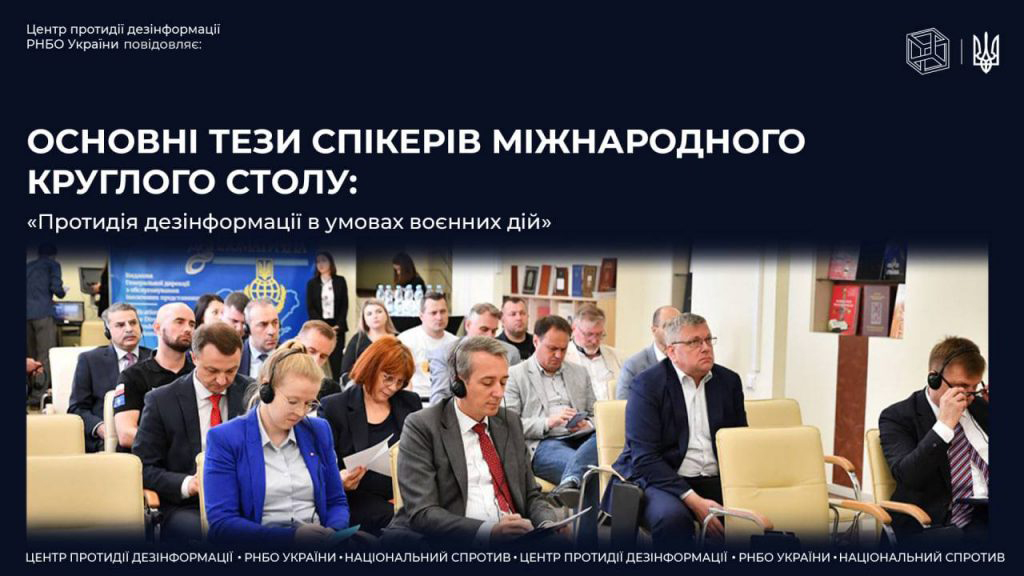 On September 1, 2022, at the initiative of the Center for Counteracting Disinformation at the National Security and Defense Council of Ukraine, a two-day international round table meeting was held in Kyiv on the topic “Counteraction against disinformation in the context of hostilities”.

The event was attended by representatives of the United States and Europe.

Participants during their speeches noted, in particular, the following:

Representative of the Secretary General of the Council of Europe on the coordination of cooperation programmes of the Council of Europe Mr Steen Nørlov: «Russia is conducting a powerful disinformation campaign that has already affected not only Ukraine but the whole world, so it is necessary to counter Russian info-terrorism immediately, and not postpone it for a long time. Successful countering of disinformation is based on truthful media as well as highly qualified specialists.

Secretary of the NSDC of Ukraine Oleksiy Danilov underlined: «Ukraine has won on the information front, which is no less important than the battlefield». Russia, he noted, works according to the patterns of Nazi Germany, spreading «lies, lies and more lies» around the world.

«The totalitarian regime operates according to its own rules and does not accept other rules».

«The amount of money that Russia invests in the information war in Europe and Ukraine is phenomenal, it is billions of dollars».

Ambassador of Poland to Ukraine Bartosz Cichocki: «… 200,000 Ukrainian children start their learning in Poland – this is in kindergartens and schools, and this does not include students».

«I am convinced that the war generation, which now lives and studies in Poland, will definitely return to Ukraine and rebuild a modern European state», he said.

Ambassador of Latvia to Ukraine Ilgvars Klava: «Ukraine can share its rich experience, as it has been fighting on the information front since 2014.

Latvia learns to counter disinformation considering its own mistakes, as well as the mistakes and experience of other countries».

Ambassador of the Republic of Moldova to Ukraine Valeriu Chiveri declared full support and understanding of the situation from Moldova in his report: «The information space of Ukraine and Europe is constantly under pressure from Russia. A direct consequence of propaganda is the separation of the community in Moldova. Only by uniting the countries of Europe will be able to effectively resist enemy propaganda».

Ambassador Extraordinary and Plenipotentiary of Montenegro to Ukraine Dragica Ponorac: «Russian disinformation and propaganda is our common challenge. It has infiltrated my country and struck a story because Russia is disinformating our society by distorting the facts. We have to work together to develop strategic communications in the field of countering Russian disinformation. Disinformation is the biggest challenge, as it has an impact on the development of democratic processes in independent countries».

Chargé d’Affaires of the French Republic to Ukraine Benjamin Rohrig: «The fight against disinformation is taken very seriously in France and we know that Russia uses information as a military tool to serve its imperialist war. France responds at the national level to counter Russian disinformation, but also at the EU level and in the G7 framework. At the national level, since the beginning of the war, we have been producing products almost on a daily basis using vectors such as the France diplomatie website, Twitter accounts in six languages, Facebook, Instagram or Telegram. At the European level, the Digital Single Act was adopted under the French presidency of the Council : it sets rules to make digital platform accountable which will help to fight against contents relaying disinformation actions. Within the G7 format, we are part with our partners of the G7 “Rapid Response Mechanism” initiative to improve our coordination between governments, social networks and civil society to fight against Russian disinformation and support the integrity of the Ukrainian environment».

Commissioner for the Protection of the State Language Taras Kremin: «Russia has been actively spreading narratives about the absence of Ukrainian statehood in recent decades. A presentation on the topic «Disinformation in the context of the «language issue» was also held».

Acting Head of the Center for Countering Disinformation at the National Security and Defense Council of Ukraine Andrii Shapovalov underline the need to create an international hub for combating information threats: «Today, Ukraine has to implement a «civilizational decision»: to stop the information terrorist – Russia, which has been putting pressure on our state and our strategic partners for decades».

Chief Executive and Programme Director at International Center for Defense and Security (ICDS) Dmitri Teperik:«Ukraine has many years of experience in the fight against Russian disinformation. I am convinced that using this experience will help all developed countries to counter Russian propaganda in the future. This is especially important for Estonia because my country suffers from both Russian disinformation and cyber attacks on the national security system».

The head of the Information Environment Assessment Department of the Department of Strategic Communications of the Armed Forces of Lithuania, Major Tomas Balkus: «Lithuanian society has repeatedly encountered various manifestations of Russian disinformation. With the beginning of the full-scale invasion of Russia on the territory of Ukraine, we carefully analyzed the narratives spread by Russian propaganda in Lithuania and Ukraine. It was found out that Russian propaganda mostly uses the same narratives. But we noticed that in the Ukrainian information space, Russian websites are also spreading new messages, in particular, that NATO wars with Russia on the territory of Ukraine».

New political Affairs officer at German Embassy in Ukraine Hannes Neugebauer: «Unfortunately, Germany has a long experience of facing the spreading of Russian disinformation in society, which has led to the polarization of our society. After Russia’s illegal full-scale invasion of Ukraine, Germany increased its efforts to change its approach to combating Russian disinformation on the international stage.

Russia has a strategy of involving society in its lies. Russian narratives are the same: history, economic collapse. She promotes them through various social networks.

Because of Russian disinformation, African countries blame the West for the famine. Although in fact Russia is to blame for the famine, since it started its illegal invasion».

Public Relations Officer of the US Embassy in Kyiv Robert Post: «Unfortunately, we know the scale of Russian disinformation is spreading, so we use the best experience in countering Russian disinformation. We work in cooperation with the Ukrainian authorities, civil society, media and our own Department of State experts to actively fight against Russian disinformation and propaganda. The most effective way to combat this is to increase transparency and awareness of Russia’s tactics and tools and deny Russia the opportunity to use lies to create an ecosystem of propaganda and disinformation».

First Secretary of the Policy and Bilateral Relations Department of the Embassy of Canada Molly Graham: «Canada, like other democratic countries, clearly understands the threats posed by propaganda and disinformation to freedom of thought. In the fight against disinformation, we combine and focus our efforts on conducting training for journalists on countering disinformation. We pay a lot of attention to checking social networks and focus on verifying messages».

The head of the operations department of the Swedish Psychological Defense Agency Mikael Tofvesson: «Our doors are open for cooperation with Ukraine in countering Russian disinformation. Our main task is to monitor, analyze and counteract the impact of Russian disinformation on society. Our struggle is aimed at building a free democratic society, where there is no place for propaganda and misinformation, but only genuine freedom of speech and pluralism of opinion».

“During a crisis, like a pandemic or in war, disinformation spreads and transforms very quickly. Ukrainian women and girls in particular are now increasingly facing gendered disinformation. Women Ukrainian refugees have been subject to a barrage of sexist comments from around the world, reiterating harmful gendered stereotypes and trivializing the severity of their situation due to the war. One of our main challenges now at UNDP is to help Ukraine tackle the threat posed by the growing popularity of certain applications through which disinformation spreads. UNDP is developing and implementing digital solutions to expose disinformation and is conducting educational and awareness-raising activities on information management, cybersecurity, cyber hygiene, and cybersecurity for vulnerable and hard-to-reach segments of the Ukrainian population”.

Senior expert, Senior national representative of the Scientific and Technical Development Branch at the NATO Strategic Communications Center of Excellence Sara Sorensen: «Russian propaganda spreads in different directions, affects geography, history, politics, economy. The world has already been able to feel the impact of Russian propaganda on these areas and understand that the aggressor is engaged in economic terrorism. The fight against disinformation is very important for a democratic society».

Deputy Director of the Department of Sanctions Policy of the Ministry of Justice of Ukraine Iryna Kireeva:«Information is a more serious weapon than what we see in war because information affects a large number of people in different countries. A document on foreign influence on democratic processes has been adopted in Europe, so we can see how serious it is. The fight against disinformation takes place at all levels, this issue is very relevant. No matter how many methods we generate, we will not be able to grasp the entire flow of information, but we can teach society to distinguish information from disinformation».