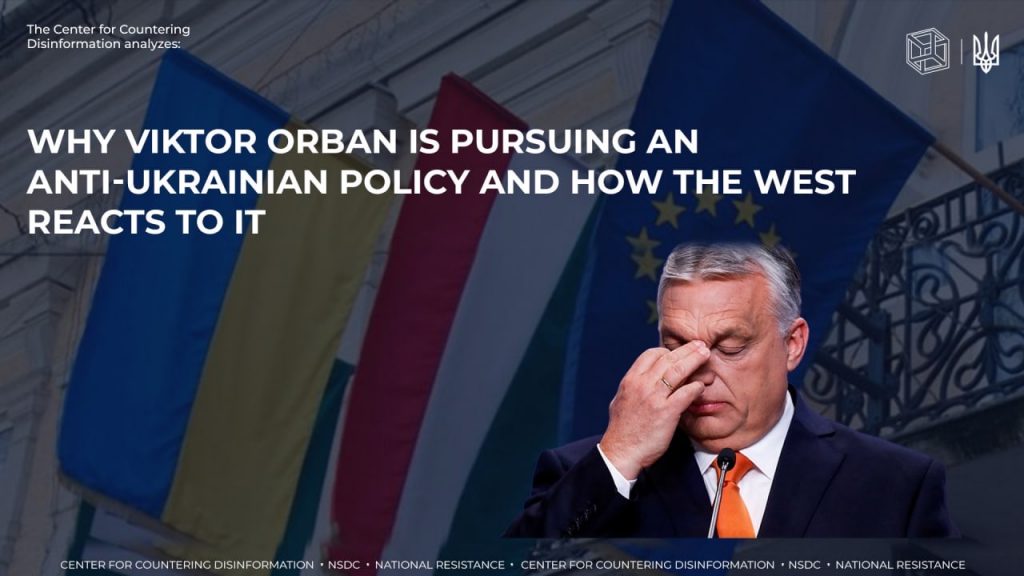 ❗️ In the fight against russian aggression, Ukraine has the full support of the European Union countries, with the exception of those who have nothing to lose – the DPRK, Syria and Belarus and, unfortunately, the EU member – Hungary. The Hungarian government headed by V. Orbán not only didn’t break off relations with his russian friend putin after the start of the full-scale war, but on the contrary, is trying to get closer to him. Hungary does not hide too much its activity as a lobbyist for russian interests in some issues (for example, when it blocks sanctions against Patriarch Kirill, or gives shelter to FSS agents under diplomatic cover).

At a meeting of EU ambassadors on Wednesday, Hungary announced that it would not support a long-term aid package for Ukraine. This threatens its failure, as it requires the support of all 27 EU states due to budgetary rules.

👍 On November 9, the European Commission proposed an unprecedented support package for Ukraine in the amount of up to 18 billion euros for 2023. This assistance will be provided in the form of soft loans, which will be paid in installments starting from January 2023.

❓ Why does Orban continue to flirt with putin and russia?

✅ Orban owes putin political success and a sufficiently long period of economic stability and low energy prices for the population. The funding model that Orbán built in Hungary involves receiving «white» money from the European Union on the one hand, and supporting his regime at the expense of russian «dirty» money on the other. And that is why he plays such a strange role: on the one hand, he understands that he is nowhere without the EU, and on the other – he continues to flirt with putin – he launches russian business to Hungary, does not offend russian spies-«diplomats», protects against the sanctions of the russian Patriarch Kirill… However, the main source of funds for Orban remains the European Union, because due to the war with Ukraine, russia is reducing the financing of the Hungarian regime.

🔸 Hungary’s blocking of aid to Ukraine is a blackmail tactic in order to allocate more than 13 billion euros to Budapest, because Hungary is in a deep economic crisis. Brussels has previously threatened to freeze these funds if Hungary does not show progress in solving problems related to the retreat from the principles of democracy.

✅ The essence of Orban’s anti-Ukrainian rhetoric is not personal revenge against Ukraine, it is only business. Orbán’s anti-Western government is supported by russian dirty money, gas and oil. Hungary is 85% dependent on russia for the supply of gas, 65% for the supply of oil, and 100% for the supply of nuclear fuel. The Hungarian company Mol, controlled by Orban, operates on russia’s Urals oil and provides surplus profits to finance the projects of his ruling Fidesz party.

❓ What will happen next?

✅ Because of his anti-Ukrainian position, Orban already has serious problems in the EU. The EU regards Hungary’s blocking of the support package for Ukraine as blackmail. As the vice-president of the European Commission V. Dombrovskis stated, in order to ensure the necessary unanimity for the approval of the aid package for Ukraine, the European Commission will «work» with Hungary. In diplomatic slang, this means that the European Union, in case of Orbán’s further position, will use the mechanism of the rule of law, according to which it plans to freeze a third of the 7-year budget for Hungary. And Germany’s three ruling parties called on Chancellor Olaf Scholz to reconsider the allocation of financial aid to Hungary in the amount of 7.5 billion euros. In addition, the EU, under the pretext of the lack of judicial system reforms, stated that it is not ready to allocate EUR 5.8 billion in aid to Hungary to recover from the coronavirus pandemic.

🔸 Therefore, there is every reason to believe that the Hungarians are provoking the European Union in order to reach an agreement in the end.

✅ Due to sanctions and war, the russians will no longer be able to financially cover the loyalty of the Hungarians. Hungary is already preparing for the fact that in the near future it will have to abandon russian oil and gas, but it is not taking a single step to diversify.

☝️ Under these conditions, Orban can still reconsider his position and start making decisions beneficial to Ukraine. Moreover, on November 8, the Minister of Finance of Hungary, M. Varga, tried to justify the position of his government and stated that Hungary is ready to support Ukraine, but without contributions to the loans that the EU is going to take for this purpose.

✅ The financing crisis will provoke further decline of the Hungarian economy and create real prerequisites for the fall of the Orbán regime. After all, in order to buy the loyalty of voters, Orban significantly increased the spending part of the country’s budget. Currently, there is nowhere to get money for «thirteenth pensions», freezing of fuel prices, payments for children and write-off of loans for the third child, additional payments to owners of weapons, the police. Already now, due to serious financial problems, the government is forced to close recreation centers and freeze a number of infrastructure projects throughout the country, which were supposed to be financed by EU funds. If the European Union cuts off Hungary from sources of funding, Orbán will simply have no alternatives to stay in power, because Hungarian citizens will make him responsible for the decline in living standards. Orbán’s previous tactic of blaming all the troubles on enemies in the European Union hurts will not pass. Therefore, the main goal for Orbán in the near future will be to preserve power and find ways to unblock European money for Hungary.

✅ Russian propaganda will begin to work even more actively on the «militarization» of Ukraine-Hungary relations. In parallel, the narrative of territorial claims to Ukraine will be «unwinding». Even now, the efforts of Orbán’s pocket organization CÖF («Forum of Civil Solidarity») and the under-controlled mass media in Hungary are forming public opinion about the validity of territorial claims to Ukraine, and a part of the electorate (up to 10%) really dreams of a «great Hungary» and thinks in terms of revanchism. It is not for nothing that a high percentage of the population answers the question «do you consider the territory of a neighboring country your own?» answers «yes», referring to Transcarpathia.

✅ It is necessary to distinguish Orbán’s policy from the views of other political forces in the country. Thus, a member of the Hungarian Parliament from the opposition party Együtt («Together») Zoltan Vojdo said in a speech at the Ukrainian Central European Forum in Lviv that he considers it necessary to change Hungary’s policy towards Ukraine, and emphasized that Viktor Orbán, having actually supported russian aggression, puts Hungary on the wrong side. On November 5, in Budapest, several hundred people took part in a demonstration initiated by opposition member of parliament Akos Hadhazy under the slogans «Long live Hungarian freedom! Glory to Ukraine!» Hadhazi also declared the need for a «hybrid revolution» against the Orbán regime.

✅ Also, changes in Orban’s position regarding Ukraine will largely depend on the political situation in the USA, because he is counting on the return to the presidential chair of Trump, whom he publicly supports. But the US presidential elections in 2024 are still far away and their outcome is difficult to predict.

❗️ With his «alternative» view of Europe and the war in Ukraine, Orban has completely lost his strategic vision and is leading his own country to political and economic defeat. After all, anti-Hungarian sentiments are growing in the world, and the economy is on the verge of collapse. However, the European Union has an effective mechanism to influence Orbán’s position by limiting the flow of European money.