Головна | Articles | How will changes in Congress affect support of Ukraine

How will changes in Congress affect support of Ukraine 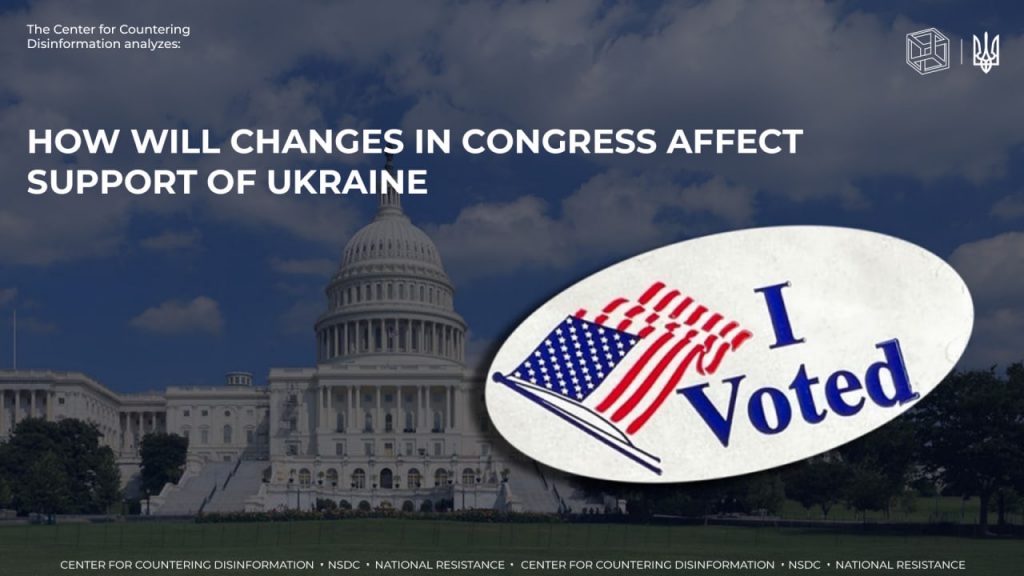 Midterm elections to the US Congress have become especially important for Ukraine, because the willingness of the US to continue supporting Kyiv will depend a lot on the configuration of this legislative body.

Preliminary election results indicate that the distribution of seats between Republicans and Democrats is as follows:

✅ In the Senate (100 seats, 51 seats are needed for a majority): 50 to 49 in favor of the Republicans (a Republican must win in Nevada, and then only the decisive Georgia with a runoff will remain).

👍 So the Republicans are currently winning, although the so-called red wave (devastating victory of the Republicans), which was so expected in the kremlin, didn’t happen. After all, on the eve of the elections, russian-controlled media spread the thesis that the victory of Trump will allow putin to come to an agreement and quickly close the «Ukrainian issue», of course, in the russian sense of it. Biden’s Democrats appeared to have enough tools to roll back this wave, but not enough to completely reset it. Everything will finally be decided in a month, after the second round in Georgia, whether the Democrats will be able to maintain at least a balance in the Senate.

❓ How will the results of the midterm elections in the USA affect American policy towards Ukraine?

✅ In fact, Trump and the Republicans, who are represented by the national industrial elite of the USA, aren’t putin’s allies. They are also enemies of russia. But if the supporters of Biden’s course are implacable enemies of today’s russia who won’t stop until they destroy putin’s power, then Trump is an enemy with whom, at least in theory, putin can come to an agreement.

✅ As we can see, the most favorable forecasts for the Trumpists are not justified, the «red wave» promised by the Republicans didn’t happen, and in fact there will be fewer of them in Congress than expected. At least, both the Senate and the House of Representatives will continue to have a majority of those who support Ukraine «as long as it takes». This majority understands that without the financial and military support of Ukraine, putin cannot be stopped, and in the case of further russian expansion, the United States will have to defend its NATO allies in Europe.

✅ The strengthening of the positions of the Republican Party in Congress doesn’t at all mean a change in the course of the White House regarding Ukraine. Among the Republican Party members of Trump’s so-called Reagan wing of the party, there are many who have promised to continue to provide support to Ukraine, and in some cases have called on the White House to do even more. Mitch McConnell, the Republican leader in the Senate, has repeatedly shown commitment to the line in support of Ukraine, despite the more skeptical sentiments of some Republican senators, such as the Republican leader in the House of Representatives, Kevin McCarthy. Republican Congressman Michael McCaul, who is likely to lead the House Foreign Affairs Committee, said he wants more weapons sent to Ukraine, but also «more oversight and accountability over funding».

Today, it is impossible to say with certainty how financial and military support for Ukraine will change in the future. However, it is clear that approving new aid packages for Ukraine with the new Congress will be more difficult than with the «old» one. After all, such odious figures in the context of further assistance to Ukraine got into the Senate in these elections, as one of the most loyal candidates to Trump, J.D. Vance from the Ohio district, who previously «belonged» to a great supporter of Ukraine, Rob Portman. Under the old composition of the US legislature, it was in the House of Representatives that a larger number of Republican lawmakers opposed previous aid packages to Ukraine. In the new composition, Republicans are in a clear majority, which will not improve the situation with voting in favor of Ukraine. In addition, even in President Biden’s own party, there remains a «left progressive wing» that bets primarily on peace, not on the victory of Ukraine.

✅ The general line of the Biden administration – «to help Ukraine continue its struggle without provoking the third world war» – even under the old composition of Congress, has the support of the vast majority of Republicans and Democrats. Critical statements about Ukraine don’t reflect the general position of the parties – they are mainly the voices of their individual radical representatives, motivated by the growth of their own political ratings. This line involves testing the kremlin’s reaction after each new shipment of weapons and constantly weighing the escalation risks of any political decision, so the results of the midterm elections are likely to further entrench it.

✅ According to ABC Post polls, 80% of citizens consider inflation and the economy to be the main issues. Therefore, the main question for Ukraine is what the legislators of the new Congress will focus on: the economic situation in the USA or military support for Kyiv? Today, most members of Congress support continued military aid as a security investment in their own nation. After all, financing for Ukraine ($66 billion) has a relatively small percentage in comparison with the total costs of the US defense budget ($800-900 billion per year). The global economic consequences of the energy and food crisis provoked by putin have a much greater impact on the US economy than the provision of military and economic aid to Ukraine. Currently, lawmakers have until January of next year (before the new Congress begins work) to vote on an additional aid package for Ukraine (about $60 billion). According to American politicians, this will guarantee aid to Ukraine regardless of the election results.

❗️ Thus, regardless of how much aid to Kyiv eventually reaches Congress, the policy of supporting Ukraine over the next few years will remain unchanged.

☝️ Further US policy towards Ukraine will depend on the results of the 2024 presidential campaign, which is already gaining momentum. Much more will depend on who will lead the White House than on congressional elections.

Without a doubt, the key narrative in the kremlin’s propaganda rhetoric about the end of providing Ukraine with financial aid, «because these funds are better spent on the needs of Americans», will be even more actively promoted in American society through the controlled foreign language media and putin’s lobbyists in the USA.